As we close out 2017 I’m thankful for the numerous neighbors, leaders, artists, and organizations I have had the honor of working with to Make Place Happen in Baltimore and beyond. From championing pedestrian accessibility around Druid Hill Park, to exploring the robust and emerging civic spaces and public art of Arlington County, to colorfully reconfiguring concrete paving for playful action, place is truly what we made of it. Public space is not just constructed out of tactile materials like pavement, landscaping, and benches, but also the intangible – knowledge, organizing, and programming. Through New Public Sites walking tours we poetically re-experienced everyday public spaces while learning from community leaders and civil servants how to affect change at the block level. Artscape showed that streets and bridges don’t have to be just for cars, but can also be spaces for ecstatic pedestrian interactions. Workshops like the Baltimore Museum of Art’s Visioning Home created spaces for inclusively mapping out creative futures for the city. I am inspired by my collaborators who believe that we can expand such temporary zones of autonomy into lasting places of accessibility, well-being, joy, and freedom.

This past year I served as a public artist in residence for Arlington County where I led several walking tours of neighborhoods including Lee Highway, Columbia Pike, Courthouse Square, and Rosslyn. I produced the tours in collaboration with neighborhood leaders, small business owners, planners, and county officials. Together we explored neighborhood histories, activated public spaces and public art, and learned about past and ongoing community based planning efforts. The tour series was produced in partnership with Arlington Arts, Arlington Public Art, and Walk Arlington with support from the Arlington County Department of Community Planning, Housing and Development, Columbia Pike Revitalization Organization, and the Lee Highway Alliance. Special thanks to Angela Adams, Elizabeth Carriger, Alli Henry, Kris Krider, Doug Plowman, and Sol Schott for all their input and support.

In April I led Bromo Spectacular, a set of New Public Sites walking tours that explored the invisible public spaces and storied buildings of Baltimore’s Bromo District while highlighting the speculative and spectacular efforts shaping the neighborhood to this day. Bromo Spectacular was presented as part of Front; an augmented reality and online exhibition addressing issues of urban renewal by reimagining vacant storefronts throughout the Bromo Arts and Entertainment District. Much appreciation to curator Betty Gonzales, the Maryland Institute College of Art Curatorial Practice program, and guest speakers Michael Benevento and Carly Bales for their support and participation.

Later in April I converted a disused basketball court into the Greene Tree Agility Trail, an interactive playscape for younger children to engage their neighborhood public space through physical games and exercises. Thanks to the Greene Tree Homeowners Association for the commission. 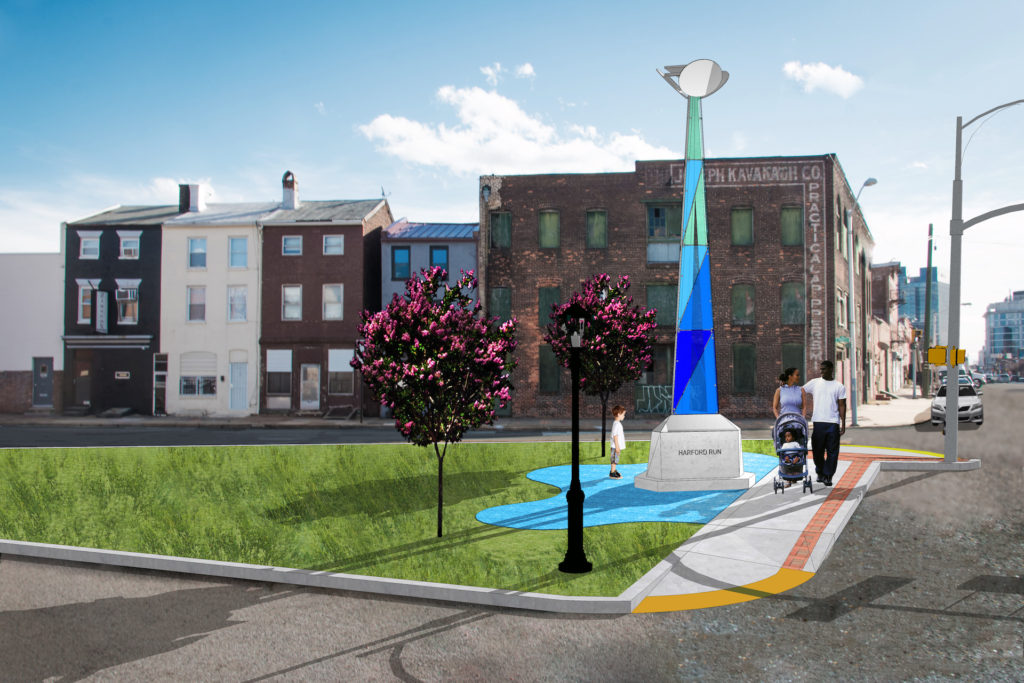 After a year of research, community engagement, and designing, in May public artist Falon Mihalic and I secured approval from the Baltimore Public Art Commission for our Periscope Public Art for Central Ave design. Periscope will stand as an obelisk-like monument to water in place and pedestrian oversight. The tower will empower pedestrians with elevated views of their surroundings while colorfully evoking the water cycle of precipitation, collection, and flow. The permanent public art project is slated for construction in 2019.

Every few years I send BOPA a weird proposal to rethink a section of street for Artscape – the largest free arts festival in the U.S. This year my proposal was for a forest of wiggling trees, and to my delight, they accepted! Dancing Forest was a kinetic environment of inflatable trees emblazoned with trail markers identifying Baltimore’s many classic places, features, and customs. Participants were encouraged to walk among and explore the animated trees as they undulated in the sky. Underfoot, we transformed the concrete abyss that is usually the Charles Street Bridge into a supple terrain of vibrant green grass for people to walk on. The car-free bridge became a zone of pedestrians frenzy as hundreds of thousands of kids and adults wiggled with, hugged, and relentlessly tipped over the twenty-seven inflatable trees. Huge thanks to Baltimore Office of Promotion and the Arts (BOPA) curator Ashley Molese for making this surreal vision possible, and to Melvin Thomas for installation assistance.

In September I was honored to create an interactive, immersive floor map for the Baltimore Museum of Art’s Visioning Home workshop. Visioning Home was a day-long workshop at the BMA that invited participants to challenge the entrenched narratives about Baltimore neighborhoods and envision possible futures. After a series of BMA-facilitated in-depth conversations and collection encounters, I led participants in a mapping exercise in which they used laser cut cardboard signs to write and illustrate their neighborhood assets, challenges, and new ideas. The room-sized results spoke volumes for the creative ways we can shape Baltimore’s future. Much appreciation to BMA educators Elizabeth Benskin, Jessica Braiterman, and Dave Eassa for the opportunity.

Building on the momentum of wanding Mondawmin, in November I led another New Public Sites walking tour as part of Free Fall Baltimore. Druid Hill Reservoir Interchange explored the overlapping embankments and sidewalks to nowhere between the Jones Falls Expressway and the Druid Hill Park Reservoir. The tour focused on the history of the the park, the absurd and challenging impacts of surrounding highways, and background on the current reservoir construction project. In a sign of radical pedestrian success, over a dozen participants signed up at the end of the tour to become complete streets advocates seeking to calm traffic along and reconnect Druid Hill Park with our surrounding neighborhoods. Thanks to Jim Brown for speaking about the Baltimore Greenway Trails Network vision. 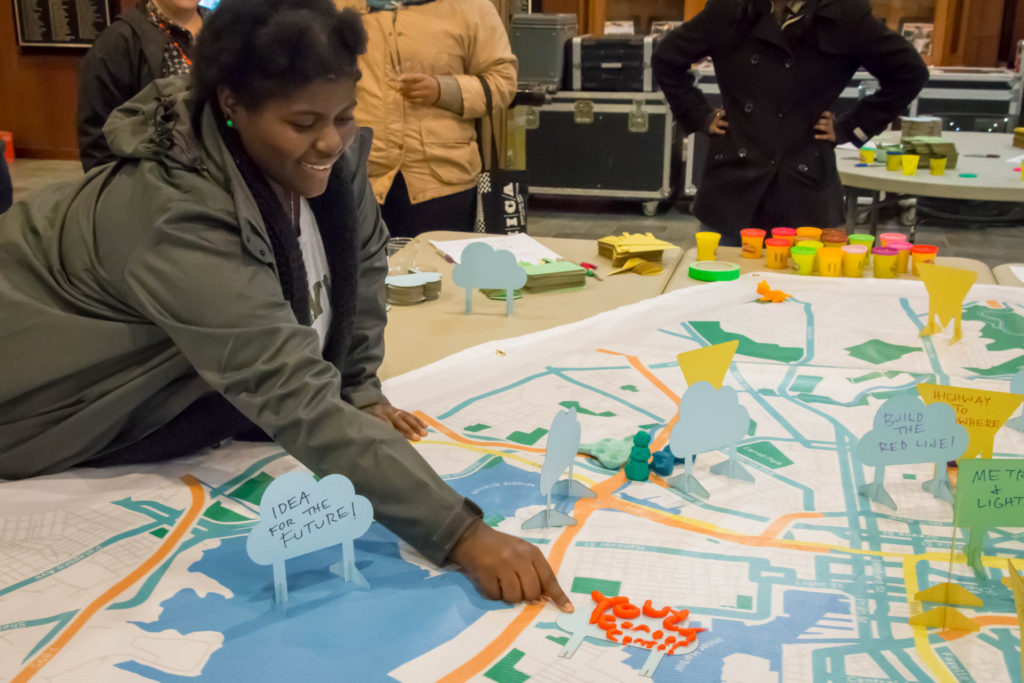 Later in November, I was invited back by the Baltimore Museum of Art to recreate an interactive mapping activity for their first ever Necessity of Tomorrow(s) lecture featuring internationally acclaimed artist Mark Bradford speaking in the historic West Baltimore Union Baptist Church. For FutureSite Baltimore, we invited the over six hundred participants to challenge entrenched narratives about our city and envision possible futures by sharing their neighborhood assets, concerns, and ideas on a massive, portable map of Baltimore City. Much appreciation once again to the BMA for the opportunity to connect with new and engaged audiences during this exceptional event.

For my final New Public Sites event of the season, I collaborated with Everyman Theatre Community Engagement Director Brian Francoise and and Bromo District menswear designer Stephen Wise on a very special Bromo District walking tour. Threading History in Place explored the invisible public spaces and storied buildings reflecting the history of Baltimore’s fashion industry, department stores and garment district. The tour highlighted past and present political, development, and marketing efforts shaping neighborhoods within the Bromo Arts and Entertainment District. Special thanks to Brian and Stephen as well as Market Center Merchants Association Executive Director Kristen Mitchell and historic preservationist Jackson Gilman-Forlini for speaking on the tour. Thanks also to MCMA and the Bromo District for co-sponsoring the tour.

Projects aside, I had the great pleasure of delivering artist talks at several local colleges about my work, including University of Maryland Baltimore County, Maryland Institute College of Art, and Towson University. Thanks to Preminda Jacobs, Monica Amor, Jennie Hirsh, and Carrie Fucile for the opportunities to speak with their art classes. Special thanks to MICA Photography Department Chair Colette Veasey-Cullors and Provost David Bogen for the invitation to participate in MICA’s 2017 Constitution Day Symposium panel Restoring Civic Culture.

Last but not least, thanks to the Maryland State Arts Council for my first ever Individual Artist Award. I look forward to more years of improving cities through public art and civic engagement within and from my homebase in Baltimore, Maryland.