Anchoring the 2017 Artscape Charles Street Trail July 21-23, Dancing Forest was a kinetic environment of inflatable trees emblazoned with trail markers identifying Baltimore’s many classic places, features, and customs. Participants were encouraged to walk among and explore the the animated trees as they undulate in the sky. Up close, one found an array of urban trail symbols, such as benches, snowballs, bikers, and buildings. Internal LED illumination of the sculptures allowed nighttime exploration. Combining spectacular movement with urban wayfinding symbols, Dancing Forest created an exciting, playful environment inspiring participants to continue exploring Baltimore’s many intriguing places. 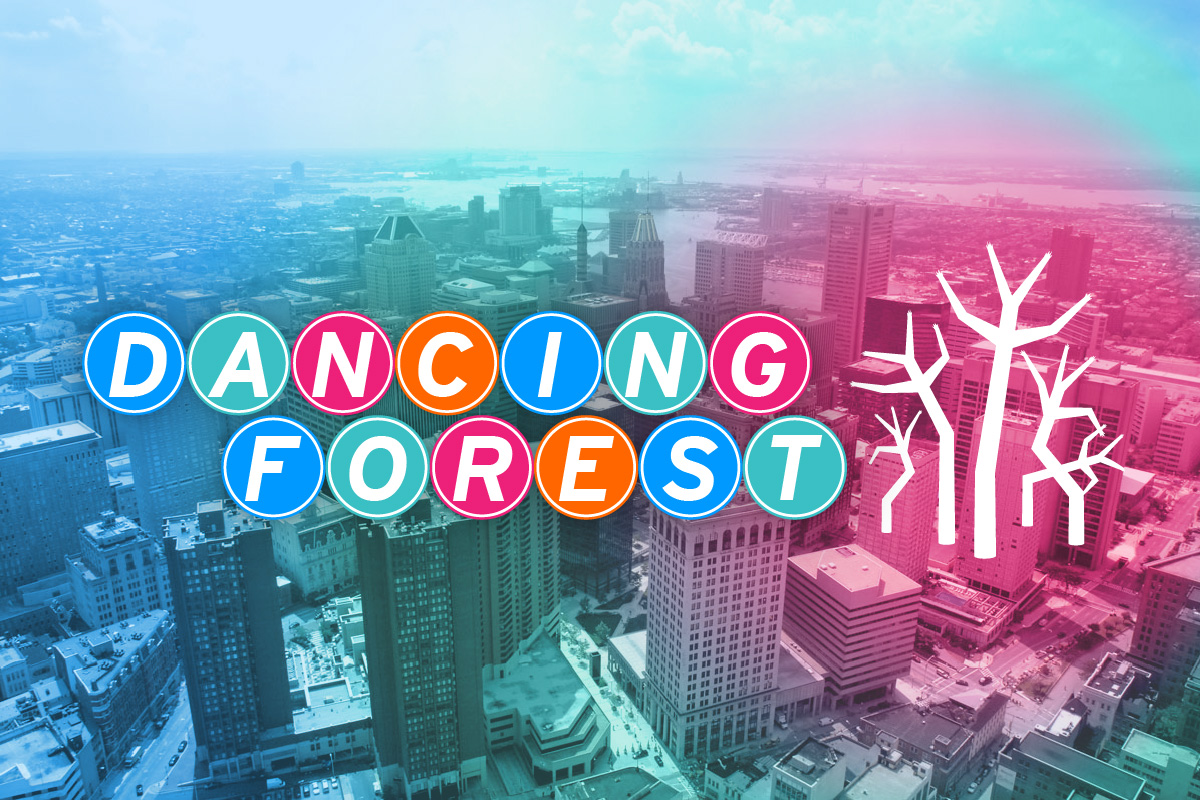 Baltimore’s historic, working class neighborhoods are best characterized by the humble rowhouse: a 2-3 story red brick residence standing wall to wall with its neighbors. With windows providing “eyes on the street” and stoops serving as social spaces, rowhouses embody the close-knit culture of Baltimore’s blocks. Learn more about the anatomy of rowhouses from Baltimore Heritage and get the full story from Mary Ellen Hayward.

Baltimore is a city of superlative slogans and nicknames. Back in the early 2000s Baltimore emblazoned its benches with a unapologetic message elevating itself above all others in the US. As “The City That Reads”, “Charm City” “BELIEVES” that it is “The Greatest City In America”. Sorry / not sorry all other American cities.

Thousands of Baltimoreans rely on their bikes to get to work, school, and see family and friends. In a city robbed of equitable public transportation, bicycle infrastructure, like protected bike lanes and bike share stations, is a low cost and quick way to give a leg up to the ⅓ of all city residents who can’t afford or choose not to drive. Bikemore is on the ground advocating for complete streets to meet the needs of all Baltimoreans, not just the entitled motorists dominating our city’s public spaces. Once a month the city’s diverse bicycle communities gather for Bike Party, a respectful parade of bicycle revelry. Share the bike love!

Ever wondered why all those rowhouses are covered in cartoonish grey, sparkly “stone”? Having to regularly paint leaky brick and a yearning for that high-class, medieval look led thousands of homeowners during the 1930s-1950s to invest in “hand sculptured” stucco facades. Known commercially as “Formstone” and “Perma-Stone”, among other names, the “polyester of brick”, as it was dubbed by filmmaker John Waters, has shown a lasting post-modern appeal.

In 1975 Baltimore began one of the earliest municipal mural programs in the country. Since the first “Thousand Dollar Walls” started giving jobs to artists and beautifying neighborhoods, hundreds of public paintings have been created. Murals give communities a sense of pride, express local and international culture, and create employment training opportunities for young artists. Find out more about the Baltimore Mural Program from BOPA.

No Baltimore parade or street party is complete without a marching band. Be they supporting the #RavensFlock or providing a safe haven and positive environment for youth and young adults, Baltimore’s marching bands make us proud.

The 12 O’Clock boys have a long standing tradition of group dirt bike rides on Sundays during which hundreds of fast moving daredevils show off their wheelies to the entertainment and dismay of countless onlookers. Baltimore City Police have tried to crack down on the culture while others have demanded the city build a dirt bike park. 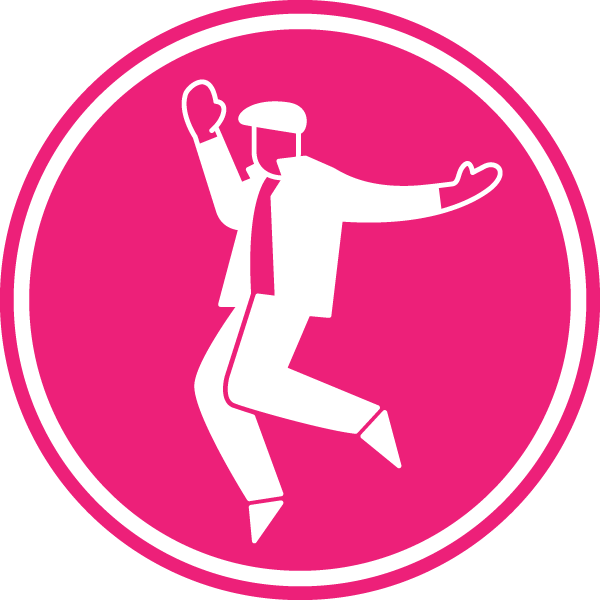 From Baltimore Club, to step, to contemporary site specificity, to strengthening communities, Baltimoreans like to boogie! Get your dance on during Artscape After Hours.

Combining playful samples with an 8/4 beat structure at 130 beats per minute, Baltimore Club will make you dance your pain away. Get scoop on the mightiest Bmore Club tracks here.

A Baltimore tradition dating back to the early 1800s, Arabbers distribute fresh fruits and vegetables to by horse and carriage to residents across Baltimore. Arabbers provide a much need nutritional service as most of the neighborhoods they serve are “food deserts”, where residents do not have walkable access healthy food. Find out more from the Arabber Preservation Society.

A staple of Baltimore carryout food, the chicken box consists of fried chicken wings sitting on a bed of fries, with a slice of bread on the side, doused in “salt-pepper-ketchup” or hot sauce, and served in a classic cardboard box. Best enjoyed with a half-and-half (lemonade and sweet iced tea). Find out more and get yours today!

Baltimore’s professional football team is named after a gothic poem about a spooky, jerk bird who rubs in the passing of a young man’s lover. Enjoy the full poem here, and don’t forget to MOVE / THOSE / CHAINS!

Crabs. You can eat them steamed or jumbo lumped. With Old Bay.

Baltimore’s Inner Harbor is a celebrated success of waterfront redevelopment, but its spectacular looks disguise a contested past and challenging present. Take a New Public Sites walking tour to discover the real stories of how powerful people, visionary plans, and community movements are still transforming the former industrial wharf into a premiere public space for all. Will we have a swimmable, Healthy Harbor by 2020? Time will tell.

What do you get when you combine shaved ice, colored syrup, and marshmallow in a styrofoam cup? A timeless summer classic: The Baltimore Snowball. Get your Skylite on.

Have you ever heard an aggressive, motorized rumble-screed looping above? Perhaps found yourself discerning muffled commands of a bullhorn from up high? Better yet, seen the dramatic cast of a spot light careening across the pavement? If so, you have no doubt experienced one of the four Foxtrot helicopters that make up the Baltimore City Police Aviation Unit.

Weather it’s getting rid of its greatest works of Brutalist architecture for unrealised downtown visions, or scrubbing Project C.O.R.E. neighborhoods of lead-infested vacant homes decades beyond restoration, Baltimore leverages demolition in controversial ways. Are we destroying our past, or laying the groundwork for the future? You decide.

Once modern, industrial marvel, Baltimore’s infrastructure has seriously gone to crap. Decades of neglect have resulted in leaking sewer pipes, crumbling roads, and the occasional sinkhole or three. So long as the EPA is around to enforce its consent decree, The Greatest City In America should stay on track to patch things up.

Baltimore City has an estimated 31,000+ vacant properties yet is experiencing a shortage of affordable housing. In some neighborhoods the vacants are getting filled up and reinvestment has turned into gentrification – when people can no longer afford to live in the places they’ve helped to create. Residents want to see vacants put to good use for the benefit of all people, especially those who need jobs and safe places to live. The Baltimore Housing Roundtable has a grassroots plan to address these needs: the 20/20 Vision for Fair Development. Click here to endorse the 20/20 Vision to combine an innovative system of community land trusts with sustainable jobs in de/construction and urban agriculture.