If you’ve recently visited Baltimore’s Druid Hill Park, you may have encountered a long row of orange and white plastic Jersey barriers running along the Druid Park Lake Drive and across the 28th Street Bridge. This is the Big Jump Baltimore shared-use path. Championed by local residents like myself, 7th District Councilman Leon Pinkett, Baltimore City Department of Transportation, and Bikemore, this temporary project counteracts decades of highway expansion with a protected space for pedestrians, wheelchair riders, and bicyclists to connect with green space, school, and jobs. Those of us living in West Baltimore certainly need it as for the past seventy years, walking or bicycling to Druid Hill Park has proven prohibitively dangerous. As a local resident and public artist, I’ve been working with neighbors on creating public art along the Big Jump pathway to make it safer for all people to enjoy the cultural and public health benefits of Druid Hill Park.

Half of residents around Druid Hill Park do not own cars. So why does the area feel like a suburban highway? From the 1940s through the 1960s, car-focused transportation projects drastically changed the face of the park. The city’s goal was faster commute times for downtown workers living in the suburbs. Back then the surrounding neighborhoods of Reservoir Hill and Mondawmin were largely Jewish and African American communities. Proposed in 1945, the “Druid Hill Expressway” would convert Druid Hill Avenue and McCulloh Street to one-way thoroughfares connecting with a widened and extended Auchentoroly Terrace. By 1947 the highway plans had sparked a robust public debate

When the “Druid Hill Expressway” was proposed, NAACP Labor Secretary Clarence Mitchell Jr. argued that increased traffic speeds through westside neighborhoods would imperil black residents effectively barred by racist real estate practices from moving to the very suburbs that the highway would serve. Shaarei Tfiloh synagogue Rabbi Nathan Drazin expressed concern that traffic would endanger children attending Hebrew school as well as the throngs of congregants who traditionally walked down the middle of Auchentoroly Terrace during the high holy days.

Despite local outcry over the expressway plans, the three local council members were asked by area political boss James Pollack to ignore the opposition of their constituents and support of the “city wide” highway effort. In those days Pollack’s Trenton Democratic Club ran a political machine that effectively picked and elected all northwest Baltimore politicians. While the councilman had local independence, they dared not to cross Pollack over issues he considered important to the city at large. It didn’t hurt that the soon-to-be widened Auchentoroly Terrace just happened to end at Anoka Avenue – the calm, tree-lined street that Mr. Pollack called home. [Hat tip to my neighbor Dr. Daniel Hindman for discovering the connection to Pollack’s home.]  In the end, the councilmen appeased the local political machine and voted in favor of cutting down over 250 trees in Druid Hill Park to make room for widening Auchentoroly terrace into a highway flushing cars in and out of the central city at the expense of safe park access for west side residents.

Just a few years later Reservoir Hill residents in on the south side of the park found themselves facing a similar fate. In 1951 Mayor Thomas D’Alesandro Jr. proposed the Jones Falls Expressway. Druid Park Lake Drive would need to be expanded to serve as a feeder road to this new highway. Ensuing years of residents’ protests were ignored and construction began in 1956. Completion of the 1948 Druid Hill Expressway and 1963 Jones Falls Expressway resulted in the widening of Auchentoroly Terrace and Druid Park Lake Drive. Two-lane, park-front residential streets became dangerous five-to-nine-lane-wide highways difficult for people to traverse on foot, and virtually impossible to cross for wheelchair riders. These expressways literally paved the way for white flight while cutting off the surrounding working class African American and Jewish neighborhoods from the park. A park once served by over 20 footpath entrances is now only equipped with merely five sets of badly deteriorated, nearly invisible crosswalks. 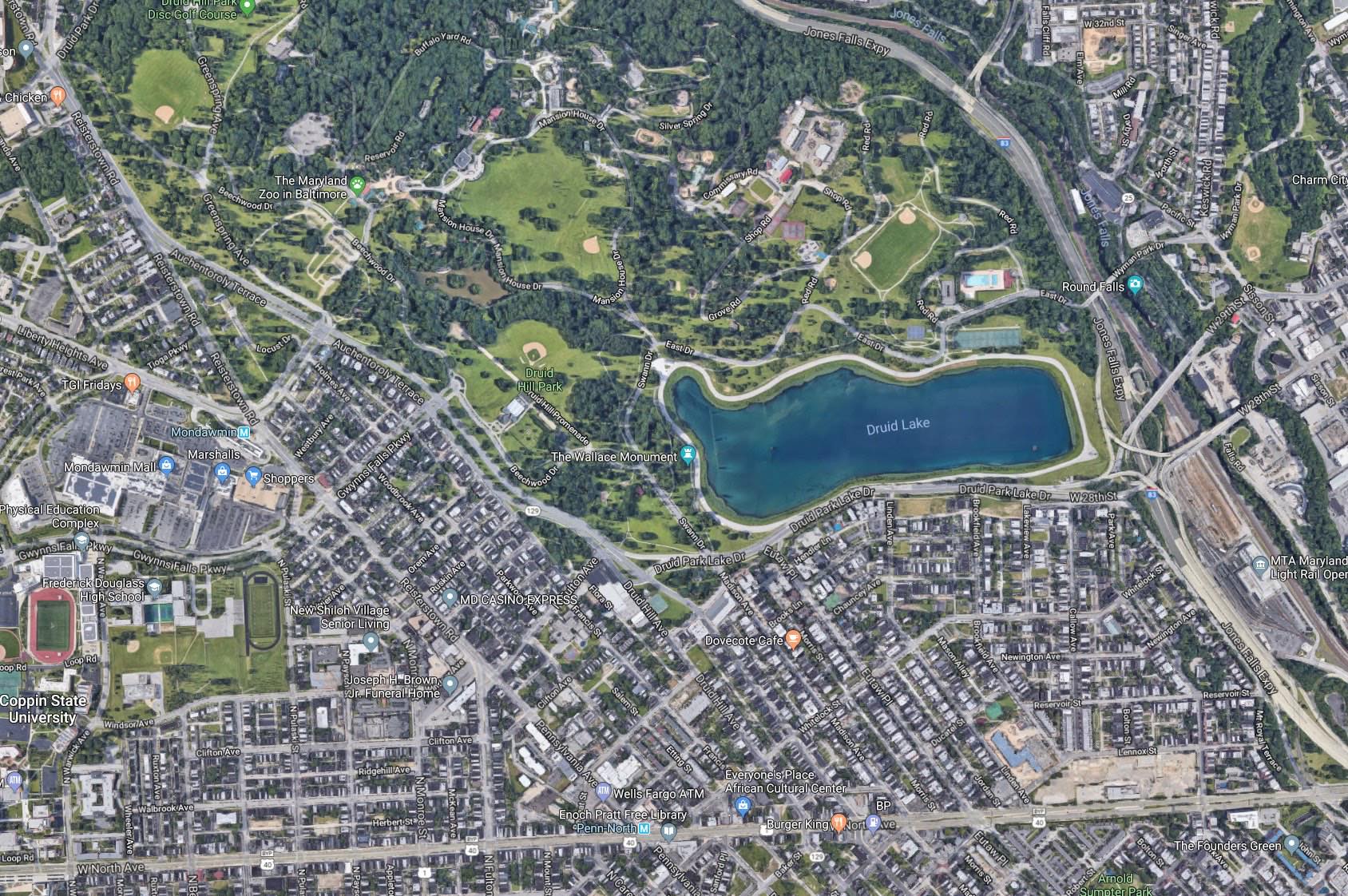 Structurally racist urban planning decisions to build highways around Druid Hill Park made it difficult for the existing majority working class, people of color living in Auchentoroly Terrace, Mondawmin, Penn North, and Reservoir Hill to enjoy the park’s public health benefits, including exercise, cultural gatherings, healthy food, and clean air. The Health Department’s 2017 Neighborhood Health Profiles shows that the majority lower income, African American communities around the park have some of the city’s highest mortality rates of cardiovascular disease and cancer. Census data also shows that nearly half of neighbors around the park do not have access to cars. As pedestrians, wheelchair riders, transit users, and people who rely on bicycles, neighbors deserve priority access to the park.

Seventy years after the first highway was built around Druid Hill Park there is now a movement afoot to rethink how these barrier roadways can become connectors enabling more equitable access to our historic, 714 acre green space. In 2017, Councilman Pinkett convened the Druid Hill Park Stakeholders group to counteract years of urban planning that prioritized cars over the public health and economic opportunity of residents. We are pushing for “complete streets” to safely connect our neighborhoods with Druid Hill Park. Complete streets are designed and operated to be safe and accessible for all, including pedestrians, children, seniors, mobility users, transit riders, and bicyclists. Earlier this year Baltimore City Department of Transportation agreed to conduct a corridor study that has the exciting potential to address our community’s concerns. Leading up to this study, a newly created, temporary shared-use path now connects Reservoir Hill and Remington. The Big Jump Baltimore pathway previews what life could be like if we privileged all people, not just outside car commuters.

With the Big Jump temporary infrastructure now in place, myself and other residents and artists are adding public art enhancements making the trail more visible and usable for neighbors. In close collaboration with Bikemore, we’ve designed and installed creative wayfinding to show that the Big Jump Baltimore pathway is for everyone. Wayfinding consists of any number of sensory cues, such as signs, maps, textures and sounds, that provide travelers with orientation and possible paths. The Big Jump logo was designed by Danielle Parnes on behalf of Bikemore, with icon input from myself. I then adapted the logo to serve as pathway signage and wayfinding. For the Big Jump path we designed a street-sign-inspired logo featuring icons of the trail’s many different active uses, including but not limited to walking, wheelchair riding, bicycling dog walking, and skateboarding. We then went to our local makerspace Open Works and used their special equipment to cut the signage and icons out of adhesive backed, colorful vinyl. We used this cut vinyl to label and decorate the plastic jersey barriers so that both pedestrian and passing motorist can understand the purpose of the pathway.

To provide wayfinding for people not in cars we made our own set of large scale street stencils highlighting the pathway primary uses – walking, wheelchair riding, and bicycling. With these stencils we boldly marked the pathway as an active place for people. We also made several different footprint cutouts representing the people and creatures that travel daily between Druid Hill Park and surrounding neighborhoods. Stenciled with colorful traffic paint, these footprint trails visually lead residents from surrounding blocks to safe access points for the Big Jump Baltimore pathway and Druid Hill Park.

Local residents deserve priority access to Druid Hill Park. The Big Jump Baltimore shared use pathway shows that through low cost traffic projects, public art and community collaboration we can make immediate positive impact on the lives of our neighbors. For the first time ever wheelchair riders and people who rely on bicycles can actually cross the Jones Falls Expressway. More work needs to be done, but the Big Jump is a step in the right direction towards reconnecting our neighborhoods with Druid Hill Park. Starting in 2019 Baltimore City DOT will be conducting a roadway alignment study through which residents will have the opportunity to shape how the city converts the dangerous highways around Druid Hill Park into “complete streets”: streets safe and accessible for all, including pedestrians, children, seniors, mobility users, transit riders, and bicyclists. In the meantime, it’s up to us take advantage of the Big Jump pathway while to creatively envisioning how our neighborhoods will one day reconnect with Druid Hill Park.

Listen to a version of this story on the Maryland Humanities Podcast: https://www.podbean.com/media/share/pb-cwqjv-9886f5

Read related letters to the editor by community leaders: