Showcasing the cherished connections between Druid Hill Park and surrounding neighborhoods, the Arches & Access project illuminated and activated the historic Druid Hill Park Gate at Madison Avenue, Druid Hill Park, and the Rawlings Conservatory with colorful lights, a community parade, and a public party. On the evening of November 3rd, 2019, over three hundred residents, artists, and performers transformed Madison Avenue at Druid Park Lake Drive into a spectacular, roving block party. Neighbors collectively created a place to march, dance, and perform in celebration of our West Baltimore communities united in green space and creating safe streets for people.

Arches & Access was a Neighborhood Lights Project presented as part of the Brilliant Baltimore / Light City festival of light and literature. The event was led by Reservoir Hill artist Jessy DeSantis, Reservoir Hill advocate Courtney Bettle, and Auchentoroly Terrace public artist Graham Coreil-Allen with major support from the Reservoir Hill Improvement Council, a grant from Baltimore Heritage, and volunteers from Beth Am Synagogue’s IFO organization. The Reservoir Hill mothers Bettle and DeSantis took inspiration from DeSantis’ colorful painting of the Arches when they came up with the idea of creating a light art project in early 2019. Later the two reached out to Coreil-Allen of Graham Projects to help realize the light art. Collectively they expanded the vision to include solar powered lights leading into the park, activated by a joyful community parade showing what life could be like without highways hindering pedestrian access to Druid Hill Park.

Graham Projects is honored to have been apart of creating Arches & Access and look forward to working again with our community partners on making this light art and parade an annual success.

I’m honored and humbled to announce that I have been awarded a 2018 Open Society Institute (OSI) Baltimore Community Fellowship providing me with eighteen months of funding and organizing support as I collaborate with residents on reconnecting our West Baltimore neighborhoods with Druid Hill Park. Through the Druid Hill Complete Streets project I will be working with my neighbors to ensure that a forthcoming Baltimore City Department of Transportation (DOT) planning effort is as reflective of community voices as possible as we seek to convert the dangerous barrier highways around Druid Hill Park into complete streets safe and accessible for all – especially the approximately 50% of area residents who do not drive. Complete Streets are streets designed and operated to be safe and accessible for all, including pedestrians, transit users, wheelchair riders, and people who rely on bicycles. During the fellowship I will be working with local youth to create traffic calming public art to slow down cars and improve pedestrian safety. Potential ideas include mural-filled crosswalks, artistic planters protecting pedestrians, and creative signs reminding motorists where pedestrians have the right-of-way.

West Baltimore’s historic work class neighborhoods of color have systematically been denied safe access to Druid Hill Park due to dangerous six-to-nine-lane-wide highways constructed over community opposition between the 1940s and the 1960s. Click here to read my story about the history behind the highways cutting off the neighborhoods of Mondawmin, Penn North, and Reservoir Hill from Druid Hill Park. The formerly two-lane, park-front streets of Auchentoroly Terrace and Druid Park Lake Drive were widened into high-speed highways primarily serving suburban commuters at the expense of park access for local residents.

Structurally racist urban planning decisions to build highways around Druid Hill Park make it difficult for the residents to enjoy the park’s public health benefits, including exercise, healthy food, and clean air. The Baltimore City Health Department’s 2017 Neighborhood Health Profiles show that the majority working class, African American communities around the park have some of the city’s highest mortality rates of cardiovascular disease and cancer. Click here for the Penn North / Reservoir Hill and Greater Mondawmin health reports. Census data also shows that approximately half of residents in the immediate area code of 21217 do not drive. As pedestrians, transit users, wheelchair riders, and people who rely on bicycles, our residents deserve priority access to the park. 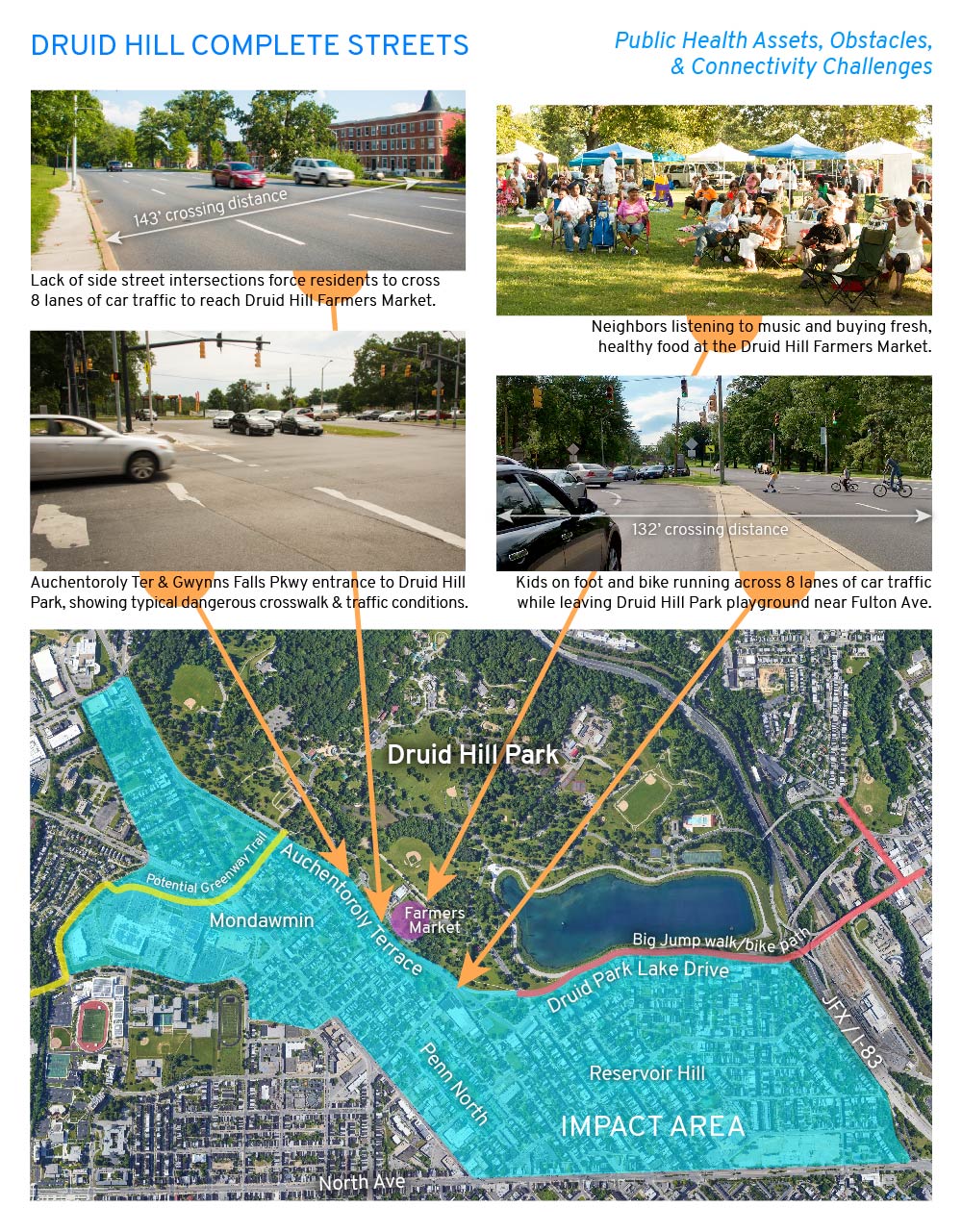 Since moving to Auchentoroly Terrace in 2013 I’ve listened to my neighbors talk about and experienced firsthand the need for more crosswalks, narrower roadways, less vehicular traffic, and slower speeds. With no playground in our neighborhood, I all too often witness small children on foot and bike darting across eight lanes of high speed traffic to reach the safe green spaces and play areas of Druid Hill Park. I also see how my retired, car-free neighbors are unable to reach the Druid Hill Farmers Market due to a lack of safe, convenient crosswalks. Most at risk are wheelchair riders who along sections of the park are blocked by non-ADA pathways.

In response to community transportation needs, 7th District Councilman Leon F. Pinkett III convened the Druid Hill Park Stakeholders group in early 2017. The group includes representatives from Mondawmin, Auchentoroly Terrace, and Reservoir Hill; Baltimore City agencies including the Departments of Transportation, Public Works, and Recreation and Parks; as well as non-profits including Bikemore, Rails-to-Trails Conservancy, and Parks & People. We are also reaching out to more local leaders and organizations to bring into the planning and advocacy effort. Thanks to the councilman’s leadership, in February 2018 Baltimore City DOT agreed to conduct a major transportation study to address our community’s concerns. This study will build on two ongoing local initiatives, the Big Jump Baltimore and the Baltimore Greenway Trail Network northwest trail planning effort. As an OSI Community Fellow, I will work full-time with my neighbors to shape this forthcoming transportation plan for rebuilding the dangerous barrier-highways of Druid Park Lake Drive and Auchentoroly Terrace as accessible boulevards that safely connect our most vulnerable residents with Druid Hill Park.

The Druid Hill Complete Streets initiative will support community education, creative urban planning, and traffic calming through public art. We will organize community-led walking tours in which youth, seniors, wheelchair riders, elected officials, and city planners learn from one another while seeking common ground for enacting equitable park access. We will also creatively engage residents in the ongoing DOT planning process through a new website, social media campaign, and activities at places like the Druid Hill Farmers Market to get input from residents who may not be able to make traditional public meetings. Lastly, we will collaborate with youth to create traffic calming public art around Druid Hill Park based on community design workshops in which residents will identify sites for enhancing pedestrian safety and reconnecting with the park. These low-cost interventions will have an immediate positive impact on park connectivity and public health while enabling residents and the public at large to envision the possibilities for complete streets.

The schedule of events and public art production will be determined by the yet-to-be-confirmed DOT study timeline. The Druid Hill Complete Streets project will bring together diverse neighborhood groups to shape the upcoming improvements around the park, empowering communities to claim our public spaces through creative city planning and public art interventions.