Tinges Commons is proud to present its second public art show featuring works by Cyle Metzger and Colin Benjamin. Color Path Projections includes two vivid installations that use line, color and space to emphasize movement along the adjacent footpath. On the Tinges Commons Kiosk, Metzger presents us with PS5, a self-described “paintstallation” that uses two-dimensional plains to imply a three-dimensionality of the space within the image. The colors for the billboard-style painting are intended to be integrative yet vibrant, making use of the area’s own palette to emphasize a footpath that naturally emerged from the site and inspired an effort to improve the quality of its common use.

Benjamin offers us Present paths are reflective spaces (here and there), a site-specific, tensile structure of driveway reflectors and bright flagging tape suggesting internal tension and spatial projection within the compact pedestrian zone. The architectural configuration of ephemeral construction materials exists outside of the frame of everyday route and routine, asking the pedestrian to make a mental and physical leap between “here and there”. Through playful color and dynamic spatial relationships, the artists hope to enhance pedestrian experience within Tinges Commons and challenge its users to reconsider their engagement with public space.

Tinges Commons is funded by the Greater Homewood Community Corporation, the Maryland Cooperative Extension, the Maryland State Arts Council, Mayor Sheila Dixon and the Baltimore Office of Promotion and The Arts. 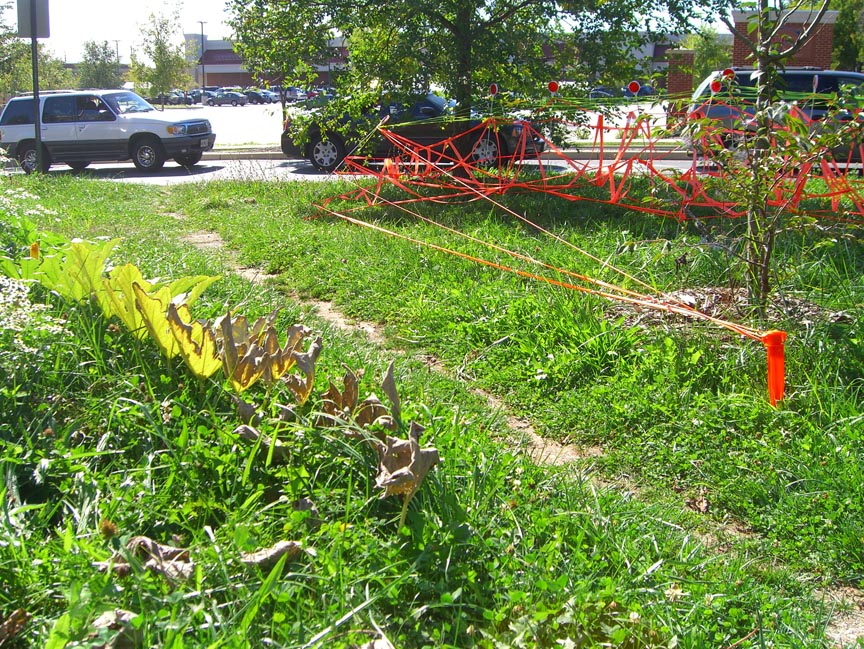